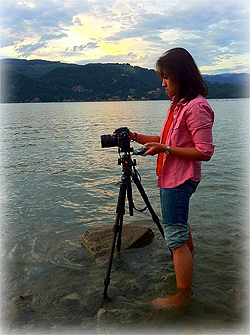 Mary Bernsen was born in the Philippines but grew up in Southern California. She also spent part of her earlier years in Jakarta, Indonesia and Cabanatuan City, Philippines. She now resides in San Francisco, California with her husband and two dogs.

Her work has been featured in several local newspapers in California, various blogs, and recently, her work with the Occupy movement was part of a group exhibit, "Occupy..." in Oakland. Mary is a reactionary photographer-capturing image of broad subjects that crosses her path. She enjoys all aspects of photography including lifestyle, landscapes, abstract, sports, as well as documenting her frequent travels; she especially loves the abandoned, the forgotten, and the decrepit.

"Our job is to record, each in his own way, this world of light and shadow and time that will never come again exactly as it is today." -Edward Abbey

Mary is very grateful for the continued love and support of her family and friends over the years. She is easily drawn to people, energized by a simple conversation with friends and strangers alike, and at her happiest when outdoors.